Seem those venerable servants of society the estate agents are suffering, after the years o’plenty, at the hands of the dreaded credit crunch.

I’m sure most of them aren’t the fleecing, self-serving, jargon mongering middlemen parasites of common conception. Nevertheless, I just don’t have a violin small enough to play the song of woe they seem to feel they deserve.

Still, it’s not all bad news. Apparently the easiest way to weather out a recession- (or downturn, or slowdown, or other random economic synonyms the difference between which I don’t quite understand)- is to already be super rich.

Dammit, why didn’t I think of that?

naturally, I have no sympathy for this customer whatsoever… 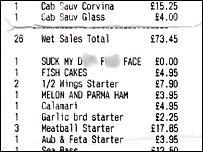 A woman in Walsall is shocked after receiving a bill with X rated comments on it after she made a complaint.

Whilst I’m sure this woman’s complaint and grievance are perfectly justified, too many years in the service industry have jaded my soul beyond the point where I can find this anything but funny.

A word of advice for whichever unfortunate, probably, lost their job over it.

If you’re going to send rude comments through to the kitchen put them on as instructions, not items with a PLU code- and CHECK THE BILL before you hand it out.

(thanks, rashbre for the warning)

i hate to say i told you so…pedantic rant No.3242/3B, and more ukuleles

Actually, NO-ONE hates to say that. Everyone loves it, with a few possible exceptions.

Like, ‘I hate to say I told you so, but pressing that red button on the jet/space shuttle dashboard was a bad idea’.

Even then, the admonition is more likely to be ‘didn’t I tell you not to press that red button/pull that pin/swing a punch at that hormonally freakish gorilla impersonator, etc.’ (And rhetoric is central here as well, given that we both KNOW you told me not to do the life/dignity imperilling thing I’ve just done.)

Although at least this is an age old device.

I’ve noticed, in my own pedantic curmudegeonly way, a bit of slippage in other forms of social linguistic smugness and rudeness. (Although it’s not the rudeness I mind, more the vapid ‘my denial makes it not true’ mindset).

I seem to remember that, once upon a golden non-existent halcyon age of linguistic exactitude, people would seek to mitigate a rude comment by prefacing it with something along the lines of, “I don’t wish to appear rude but…[insert gratuitous insult, preferably with a bit of creative compound swearing here]”

More recently this seems to have lapsed into, “I’m not being rude but..”

No, you ARE being rude.

This is not unlike politicians and other mendacious rhetorical fucktards saying they ‘utterly refute’ a comment when all they mean is that they deny it. (The other side of the same coin is represented by the mewling, greeting imbeciles pleading, “But I want this SOOOO much” as they get booted off whichever talent free freak show they’re competing on this week. ‘I want- therefore it must be so’)

It’s as if sheer force of will can morph a blatant insult into a socially valid criticism or a flat denial into a reasoned counterargument.

The qualifiers might be inadequate but at least they acknowledge that somewhere, beneath a fatuous statement that someone feels they have to make, is a degree of awareness- and forewarning- that it might be just the slightest bit irritating.

On which retrograde note, I’m ever so slightly pleased to be able to point out that I told you so-(it really doesn’t matter all that much), but it appears that ukuleles are on the way up.

parliament’s back and so is this…

The days are short, the new pencil cases and protractors have been bought and broken already- school’s well and truly back, even the one for overgrown children we call Parliament- so I thought I’d better dust off my atrophied cynicism gland and get blogging again.

Hiatus has been partly due to being busy but mainly, if I’m honest, because I’m idle to the very marrow. On that subject I’ve also got loads of writing to do so this is the best way of staving off the dread, mute stare of an empty word document.

Parliament’s back in session and, at last, it looks like a bit of good ole fashioned knockabout fun. Our gloriously ‘feral’ media have had an easy silly season of it, trawling for scraps on the McCann case, but now they can create, and then uncreate, elections for us as well.

For the first time in ages it looks like we might have a proper inter party scrap on our hands, as well as the usual implosions- even the Lib Dems seem to want to have a go at that game.

Obviously there’s barely more than a sheet of toilet paper’s worth of real ideological difference between them.

Years of Thatcherism shifted the goalposts out of philosophical view, and the real Blair legacy has been to grind spin so far into the machinery that it’s had to go back underground.

The real sport is watching Brown and Cameron try to outdo each other in displays of dough faced, paternalistic sincerity.

To be honest, we could put the teletubbies in power and by mid-way through the first term, Tinky Winky would be picking fights with the BBC over perceived bias, Po would be sabre rattling somewhere in the middle east and Laa Laa would be blaming any economic troubles on the mess left by The Banana Splits.

And yes, I know the ‘they’re all as bad as each other’ argument carries about as much currency as a Northern Rock high street branch but maybe it is time to rejuvenate our faith in the flagging public service broadcast institutions by swapping roles. (It’s a popular enough TV gimmick as it stands).

Spin, we’re supposed to believe, has little place in government anymore so maybe it’d inculcate a sense of moral rectitude in all those pesky programme controllers if they had to work in such a virtuous forum whilst our redoubtable parliamentarians could restore honour to TV. They could even remain on opposite sides of the ring- (Brown for the BBC, Cameron for ITV, he’s got form, after all, from his stint at Carlton).

And, look on the bright side, they’d all still have to be afraid of Rupert Murdoch.

(Actually, if you don’t like unnecessary musical showing off, fair enough. If you don’t like The Beatles, seek help- there’ s something missing from your shrivelled, blackened soul).

Otherwise, check out this solo ukelele version of While My Guitar Gently Weeps

yes, we are that stupid…

An advertisement offering to infect the computer of anyone who clicked on it with a virus received over 400 respondents.

cartoon genius of the finest order

Apart from building operating systems and mp3 players (anyone got a zune?), some of the things that it’s fairly commonly acknowledged that Apple do better than microsoft are designing, presentating and packaging their products. (We won’t say anything about battery life just now).

Below is a version of how Microsoft might sell the i-pod: